Categories Whisky from A to Z G Glen Scotia 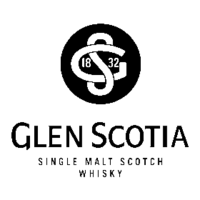 Campbeltown is an isolated, distinctive place towards the southern end of the Mull of Kintyre. The whisky produced here is special too - so much so that it’s classified as a separate region, quite apart from the Highland, Speyside, Lowland and Islay whiskies which are perhaps better known today.

Distilling was probably going on in Kintyre for centuries, but the written, legal history begins in 1609 with the granting of a licence to produce ‘aqua vitae’ to a John Boyel of Kelburn. With an excellent water supply, easy access to peat and grain and a growing market in Victorian Britain and beyond,little Campbeltown had 28 distilleries by 1851, and proudly proclaimed itself ‘the whisky capital of the world’. Today only three distilleries remain, of which Glen Scotia beneath Springbank and Glengyle is one of the smallest in Scotland.

Founded in 1832 as Scotia the distillery survived a decline in the industry in the early part of the 20th century, although it was silent between 1928 and 1933, when it was acquired by Block Brothers.

The ‘Glen’ was added to the name in 1939, and the distillery was bought by the Canadian spirits giant Hiram Walker in 1954. Glen Scotia changed hands again several times before it was bought by Loch Lomond Distillery Company in 1996.

The Mull of Kintyre peninsula is known, of course, for ‘mist rolling in from the sea’, and Campbeltown whiskies are characterised by a distinctive, salty tang. Glen Scotia is a fine example of this historic style - and your first dram is likely to be a singular pleasure.

inkl. VAT, plus shipping
Spirits and syrups coloured if not declared otherwise. All wines and sparkling wines contain sulphites.